Foods that Link to Cancer

Cancer is a common, serious condition that consistently rises these days. The primary factor is due to unhealthy habits and lifestyle. You have to be careful as to what you put in your mouth. Here are foods that have a great contribution to cancer. You may identify some to be your favorite.

The Real Truth about Sodium Nitrite and Nitrates

Sodium nitrite is added into different foods, especially the ones that are mostly bought at grocery stores. This is a type of carcinogen used for special purposes on processed meats that result to look fresher and redder or pinkish in color. It is also used to preserve them, as well as other foods and snacks. These nitrites are not the specific factor that can cause cancers. In fact, there are also natural nitrites found in certain organic foods, such as vegetables.

This type of carcinogen converts into nitrosamine when it is digested. Nitrosamine is the factor that makes cancer occurs in the system of the human body. This is also found when foods are fried, pickled, grilled, and smoked.

Now, let’s focus on certain foods where these carcinogens are mostly found.

Among the most common contributors of different types of cancer is meat that is processed. You can name a lot of these as you always have them in your refrigerator. There is the favorite of most kids the hotdog, sausages, and bacons. They contain sodium nitrite to look more reddish, while a high amount of saturated fat is also added. These all can cause a consumer to be at risk of cancers. It is suggested that you limit the consumption of these kinds of meat.

Red meat is also a food that is linked to cancer. This is because of the heterocyclic amines that are formed when you cook them, including frying, grilling, barbecuing, and roasting. This also means that you reduce eating any kinds of red meat.

Who wouldn’t want a taste of some French fries? They are crispy, oily and delicious snacks for kids, and side dish to your meal with burgers. That’s exactly the problem! Its oiliness is evident of the saturated and trans fat. It also includes acrylamides, which also cause the formation of cancerous cells. 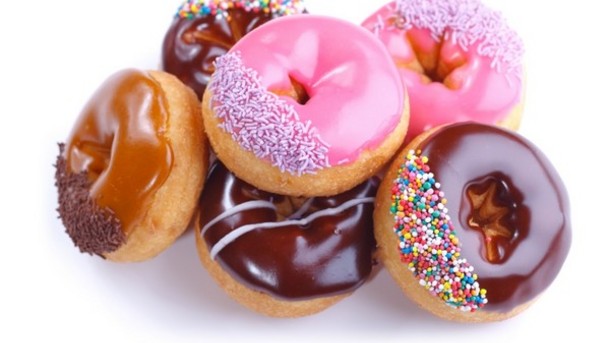 It makes you drool just hearing the word “doughnuts” or see it spelled as “donuts”. They are soft and yummy, but also not healthy. It is made of white flour, which is known to have linked to cancer, sugar, hydrogenated oils, and acrylamides. It does look delicious, but it is actually the worst and one of the unhealthiest foods you can eat.

Other foods that are probably on your favorite list are crunchy chips, brown biscuits, ready-to-eat cookies and bread. Unless you bake them with whole grain flour and not buy at any local grocery store, these are foods that can cause cancer. Most commercial foods are made of white flour, sugar, and trans fat. You also have to be careful on what you buy at local stores. Always check the label and see if the ingredients are the ones that are linked to cancer.

5. Peanuts and Other Types of Grains

A pack of peanuts and grains are other foods that you have to be aware of. They are also linked to some cancer types. The reason is because aflatoxins are usually found in these commercial finger foods. That compound has a possible risk of liver cancer.

It is very important that you know the kinds of foods, as well as beverages, that you are eating. You have to understand the nutritional facts before consuming them and listing them as your favorite foods.

Next post: Natural Ingredients and Foods that Help Prevent Cancer

Previous post: How to Deal with Cancer – Break the Silence to Family Members